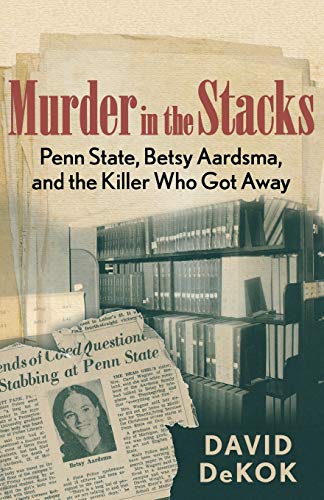 Murder in the Stacks: Penn State, Betsy Aardsma, and the Killer Who Got Away

DeKok (The Epidemic), a former investigative reporter noted for his coverage of the Centralia mine fire, turns his attentions to a baffling murder that has haunted Penn State for decades. In 1969, Betsy Aardsma, a graduate student, was murdered in the stacks of Penn State’s Pattee Library. Despite years of investigation, the killer was never definitively identified or brought to justice. DeKok reconstructs Aardsma’s life and death, sparing no detail in his attempt to provide the full and authoritative story from beginning to end. In the process, he points the finger at one suspect, Richard Haefner, a geology graduate student and secret pedophile with a checkered past and a volatile temper. Though Haefner was never charged with the murder, DeKok follows his subsequent legal troubles, and paints a convincing picture of a man with the means, motive, and opportunity for the murder. DeKok examines other suspects and every other aspect of Aardsma’s life, as well as the cultural events influencing the era: 1969, he claims, was the “long, hot summer of the murder year,” defined by a rash of high-profile murders whose culprits—the Coed Killer, the Zodiac Killer, Charles Manson—quickly gained tabloid notoriety. The sheer amount of information in the book may be excessive, but it’s well written, accessible, and undeniably thorough, making this an exemplary true-crime story. (Sept.)
close
Details