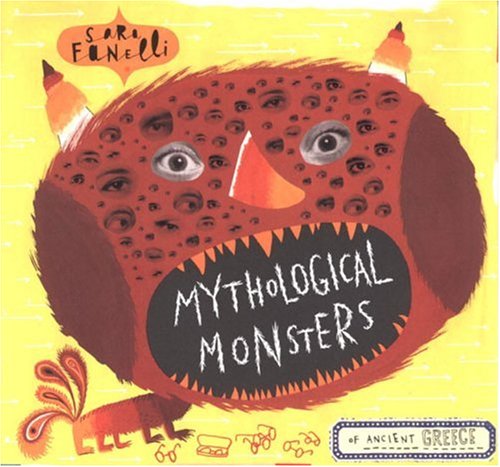 In wild hand-lettered collages that defy academic treatments of myth, Fanelli () summarizes some famous monsters of the Greek pantheon. Her portraits of weird creatures range from the comical to the grotesque, and recall the visceral imagery of Hendrik Drescher. On the imposing dust jacket and in the first spread, hundred-eyed Argus roars like a lion, but wry humor softens his threat; doodled spectacles litter the ground at his feet ("After his death, the goddess Hera put his eyes onto the tail feathers of the peacock"). Argus isn't the only one with creepy peepers. All 14 members of this sinister menagerie gaze out at readers through black-and-white magazine clippings of human eyes, which lend an uncanny appearance to Oedipus's Sphinx ("not the same as the Egyptian Sphinx") and Medusa (pictured with a scary, furry visage). Six-headed Scylla waves forks and knives as she dines upon sailors, the nine-headed Hydra squares off against Heracles ("He buried her immortal head under a huge rock") and a Satyr raises two martini glasses while "having a grand old time." Similar in approach to John Harris and Calef Brown's (Children's Forecasts, Oct. 7), Fanelli's volume, with its rough-hewn paint-and-collage style, leaves little room for storytelling. On the spread featuring the Minotaur, for instance, the author pictures Icarus and notes that Daedalus designed the Labyrinth, but does not explain their association (father-son). Readers who know basic mythology will make the most of this visual summary. Ages 7-up.