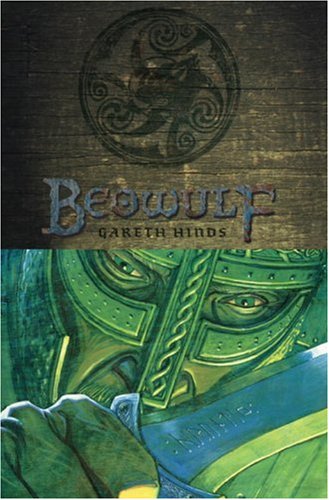 The king of heroic epics gets a lavish visual interpretation in Hinds's full-color mixed-media gem, originally self-published as three separate issues in 2000. He begins with a credit to two versions of the familiar story (A.J. Church's 1904 translation and that of Francis Gummere), in which a vicious monster named Grendel terrorizes the great hall of King Hrothgar for 12 winters, and the hero Beowulf arrives from afar, to try to defeat the creature and succeeds—with his bare hands. Then he must contend with Grendel's mother, when she comes to avenge her son's fate; the third chapter deals with the mournful end to the hero's life, resulting from a battle with an enormous dragon. Each chapter begins with a brief narrative (paying homage to the cadences of the story's early verse renditions), before giving way to a lengthy, wordless and bloody battle. Hinds's angular perspectives and unusual color palettes (dark, ruddy colors, deep burgundy blood, and not a ray of sunshine in sight) lend the book an almost overwhelming sense of menace. The third and most emotionally forceful chapter centers around an incredible two-page spread that shows the dragon awakening; it's an arresting image in a book filled with many. For fantasy fans both young and old, this makes an ideal introduction to a story without which the entire fantasy genre would look very different; many scenes may be too intense for very young readers. Ages 10-up.