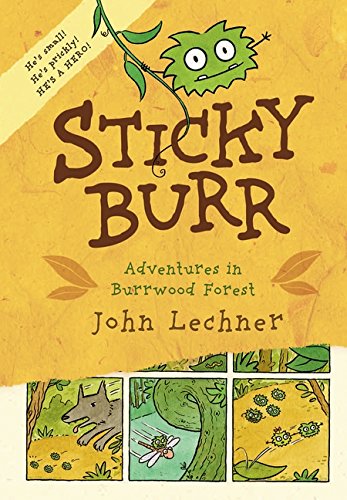 One might think burrs don’t have adventures—or affable personalities, for that matter—but this hardcover color comic sets the record straight. According to title character Sticky Burr, “We are very small and covered with tiny hooks, so we stick to things. Sometimes this can be very inconvenient!” To prove his point, assorted images show burrs attached to a rabbit’s ear, a soccer ball and a shoelace. Sticky himself temporarily gets attached to a bird’s tail (“I hung on as tight as I could”) and to a tree trunk, where, while awaiting rescue, he strums his ukulele and invents a Pooh-like song, “Stuck on a tree,/ Won’t somebody help me?” until a dragonfly friend tugs him loose. Lechner’s ( ) prickly burrs are all face: a roundish shaggy shape, two wide-open eyes, a long line for a mouth and two spindly stick-figure arms. Sticky’s close friend, Mossy Burr (identifiable by the red bow on her head), defends Sticky against local bully, Scurvy, and his sidekick Spiny. Lechner has a talent for Burr names (although there is no Raymond) and the burrs’ treehouse community even has a newspaper, . Using an outdoorsy palette, he intersperses conventional panel layout with torn pages from Sticky’s journal, set against leafy backdrops. Lechner creates an engaging nature-oriented story, alternating drolly comic moments with a surprising amount of information about life in the forest. Ages 6-10.