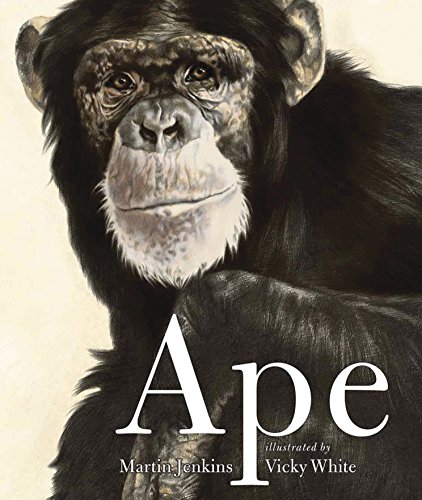 The premise is simple: introduce readers to four of the five members of the great ape family (the fifth member is actually the reader). But in the hands of White, a former zookeeper making her picture book debut, this becomes much more than a garden-variety survey. Working in oil and pencil, White portrays orangutans, chimps, bonobos and gorillas as imposing and playful, brooding and wistful—in other words, as having psychologically complex, fully realized personalities. The pictures are consistently stunning: using bold brushstrokes and theatrical lighting, White compels readers to savor the subtle nuances of browns and black that compose each animal's fur. Jenkins's ( ) economical, conservation-oriented text ably sets each scene (“Bonobo chatters and hoots and calls to her friends, while feasting on figs high off the ground”) while occasional captions add information about the apes' habitat or behavior. But this book isn't really about reportage; in fact, the portraits are set against white sweeps with only minimal propping to suggest the environment. What seems to matter for White is making an intense emotional connection between subject and reader. And she succeeds—the great apes have found their John Singer Sargent. Ages 3-7.