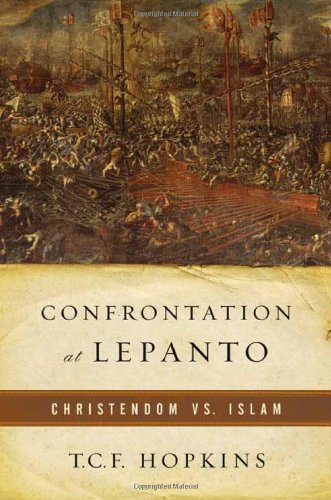 Confrontation at Lepanto: Christendom vs. Islam

Hopkins, a pseudonym for the well-known science fiction and occult writer Chelsea Quinn Yarbro, challenges the conventional interpretation of the 1571 Battle of Lepanto as having changed little about the balance of power in the Mediterranean basin. General readers will appreciate her account of the strong religious dimension of this utterly ferocious encounter in naval warfare, in which a ramshackle alliance of Christian states squared off with the Ottoman Empire at the peak of its power, each with complete confidence in God's support. The Christian victory at Lepanto freed Spain to exploit the New World and turn its attention to the Netherlands, Yarbro argues, while crippling the Ottoman navy. As a well-informed outsider, she brings a fresh perspective to a subject frequently defined by its particulars, though readers seeking close analysis of tactical, strategic and diplomatic details will be disappointed. In the end, the author argues convincingly that the unexpected Christian victory, by deepening the gulf between Christians and Muslims, confirmed the centuries-long, still-enduring struggle between them.