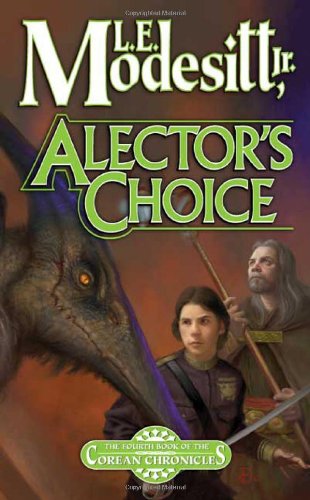 Alector's Choice: The Fourth Book of the Corean Chronicles

While not quite up to the Spellsong saga or the best of the Recluce novels, Modesitt's complex fourth entry in his Corean series (after 2004's ) contains plenty of fine world building and intelligently developed magic. With the life force of the planet Ifryn almost exhausted, its population is about to migrate to Corus, where the eight-foot Alectors, a superior race with psychic powers, are overseeing the biological preparation of this new world. Unfortunately, the migration will reduce the status of the powerful Alectors, while the Corus natives, known as indigens, will move so far down the social ladder as to be barely visible. The many subplots tend to slow the pace, but Modesitt fans, knowing what they're in for, will find reaching the end of this challenging fantasy well worth the effort. Newcomers would do best to start with (2002), the first of the Corean chronicles.