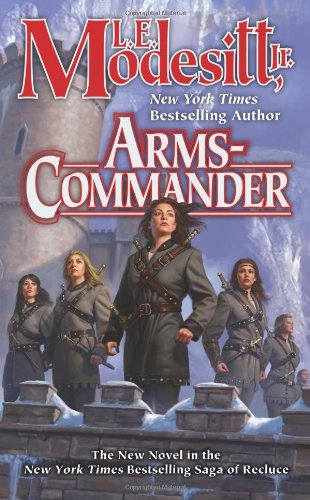 Modesitt's 16th Recluce novel (after 2008's ) continues the story of Westwind, an all-female enclave in a feudalistic world. Westwind's chauvinistic, abusive neighbors were soundly defeated 10 years earlier (as detailed in 1997's ), but the community attracts so many refugees that the nearby men invade again. The women's fighting ability and talent for psi-magic lead to the quick annihilation of the men's army, after which the Marshal of Westwind sends her Arms-Commander, Saryn, into a nearby country to prevent civil war. Saryn soon becomes bolder, developing new skills with political maneuvering as she ponders the social roles of men and women. The novel moves slowly but develops considerable momentum as Saryn works through her dilemmas in conversations and on the battlefield. Despite many protestations of emotion, there's little personal passion, but the complex plot will keep readers engaged.