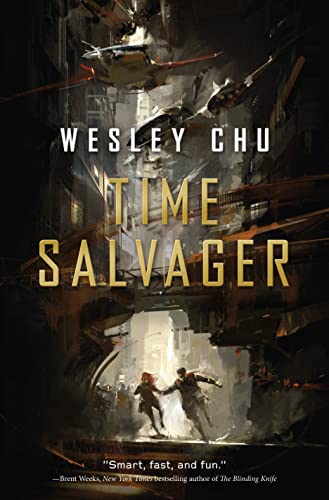 James Griffin-Mars, a highly trained “chronman,” travels from 26th-century Earth to past eras on numerous planets, salvaging coveted relics and materials to maintain humanity’s power supply without breaking Time Laws (for instance, bringing someone back from the past) or affecting the time line. An apparently unstoppable plague has made Earth one of the least desirable places to live; fortunately, advanced technology lets James communicate by thought, provides powerful armor, and shields him from environmental discomforts. Haunted by people he has left to die in the past (his sister; a Nazi soldier; “the legendary Grace Priestly”) and wishing only to complete his contract, James accepts a dangerous mission from menacing private corporation Valta, leading to life-changing choices. Like James, intriguing secondary characters such as High Auditor Levin and James’s handler, Smitt, wrestle with increasingly complex ethical dilemmas; meanwhile, 21st-century scientist Elise, for whom James breaks the first Time Law, becomes his moral conscience and romantic interest, as well as a source of hope for a dying planet. Chu (The Lives of Tao) creates a fascinating world, strange and familiar, infused with humor, sorrow, courage, greed, and sacrifice. This page-turner is a riveting, gratifying read. (July)
close
Details