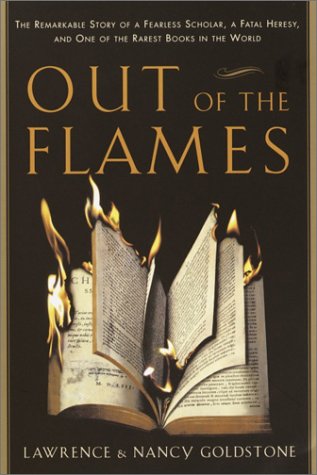 OUT OF THE FLAMES: The Remarkable Story of Michael Servetus and One of the Rarest Books in the World

When Michael Servetus was burned at the stake for heresy in 1553, he had spent much of his life running from the Church. Born into a noble Spanish family, he studied medicine and the humanities extensively. By age 20, he had written a treatise on the Trinity that incensed Church authorities and led him into self-imposed exile. But the book that doomed Servetus was (Christianity Restored), which challenged, among other ideas, John Calvin's doctrine of predestination and argued that God exists in all people and all things. The reaction to Servetus's text was so vehement that all copies discovered were destroyed. As the Goldstones (book collectors and authors of , etc.) reveal, three copies of the book still exist. In this lively account, the authors vividly recreate a Renaissance world of revolution and reform in which the dissemination of ideas flourished thanks to the printing press. They also trace the paths of the surviving copies of as they make their way through the hands of Voltaire, Rousseau, Jefferson and physician William Osler. More than a theological treatise, the contains a paragraph that explains pulmonary circulation, decades before William Harvey—generally credited with this discovery—announced his find. The Goldstones offer both a portrait of an important but neglected Renaissance humanist and a testimony to the power of books to shape minds and hearts. Illus.