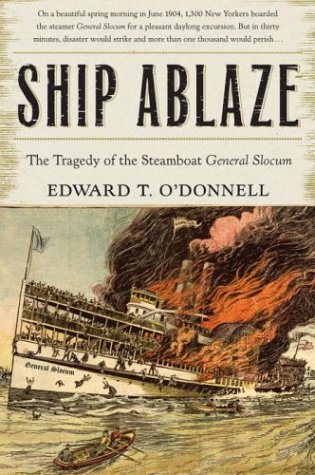 SHIP ABLAZE: The Tragedy of the Steamboat General Slocum

O'Donnell () trains his historian's eyes on one of New York's greatest but little-known disasters—a 1904 steamboat fire that killed more than 1,000 people. He leaves no aspect of the tragedy unturned as he lays out the life of the New Yorkers around the turn of the century who became major players in the ship disaster as well as the significant role newspapers played in shaping public opinion. He then details the lives of residents of the mostly German Lower East Side, who were on their way to a church picnic when the boat fire started. Using newspaper as well as second- and firsthand accounts, he then details the fire itself. The event was not inevitable, he emphasizes; it was mainly caused by a lack of safety measures—poor organization of life jackets and outdated, unchecked fire hoses, for example—and by the poor swimming skills of most of the ship's passengers. He also recreates the panoply of emotions on that June day: the panic felt by the ship's passengers as it burned, the heroism demonstrated by rescuers and the despair in the community afterward. With an eye toward today's tragedies, he shows how victims felt little solace from investigations, which became largely an attempt at scapegoating the ship's captain. In O'Donnell's deft hands, the disaster becomes more than just a historical event—it's a fascinating window into an era, a community and the lives of ordinary people.