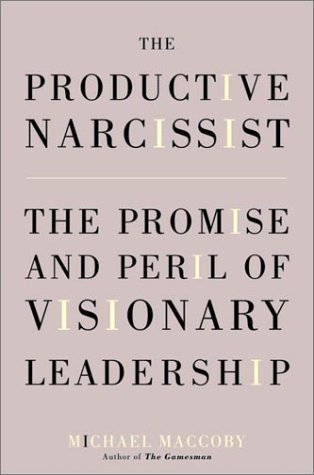 THE PRODUCTIVE NARCISSIST: The Promise and Peril of Visionary Leadership

In this provocative analysis of contemporary business leaders, psychoanalyst and consultant Maccoby () reminds readers of Freud's assessment of the narcissist as "the type of person who impresses us as a personality, who disrupts the status quo and brings about change." Maccoby finds examples of these personalities in Amazon.com's Jeff Bezos, Apple's Steve Jobs and Intel's Andy Grove. For Maccoby, the difference between the common view of narcissists as self-absorbed dreamers and the more contrarian notion of their being runaway successes like Microsoft's Bill Gates lies in their realizing personal potential ("productiveness") and being endowed with "strategic intelligence" (as opposed to measurable IQ). This type of intelligence mixes foresight, systems thinking, ability to create a vision, charisma to motivate others and a genius for partnering with complementary talents that Maccoby views as critical to success in managing innovative businesses. Maccoby does acknowledge that after recent corporate upheavals, many may be wary of this type of leader. For those working with productive narcissists, he offers strategies. Business readers willing to slog through Maccoby's sometimes academic prose will learn much here. And to counter the understandable reaction against hiring narcissists as corporate leaders—most corporations would rather avoid the type, Maccoby says—there's the cautionary tale of a 1971 Human Resources report on an executive applying to become CEO of a major company in which the man's renegade tactics and irascible personality were viewed as less than desirable; the man got the job despite HR's reservations. That applicant was Jack Welch.