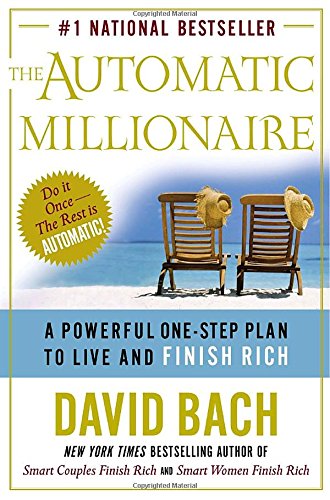 THE AUTOMATIC MILLIONAIRE: A Powerful One-Step Plan to Live and Finish Rich

Bach, author of several bestsellers including and , offers a simple prescriptive plan for financial security. The secret: the astonishingly vanilla "Pay Yourself First," which, in Bach's words, is "the one proven, easy way to get rich." Instead of worrying about taxes, budgeting or investing, the key, according to Bach, is to set aside between 10% and 15% of gross income for savings—the equivalent of one hour's worth of income every day. While this strategy may seem obvious, many people don't take this basic step. That's why Bach says everyone should write down their "Automatic Millionaire Promise," which spells out what percentage of their income they will start saving by a certain date. To insure that people carry through on their efforts, Bach says they should have deposits automatically made to a retirement account. Then, the next step is to capitalize on the power of compounding by contributing the maximum amount to, say, an employer's 401(k) account. To help readers navigate the maze of investment choices, Bach includes contact information for a number of mutual funds and Web sites offering authoritative financial information. Bach's key principle, along with such advice as buying real estate, paying down debt and making charitable deductions, is not groundbreaking; and regrettably, it may be unrealistic for many: tens of millions of Americans are in serious credit card debt because they can't make ends meet on their salaries; how, then, are they to save so much of their gross income? However, his easygoing approach, complete with real-life examples and clever phrases such as "Latte Factor," will appeal to the many money-challenged consumers who have made a New Year's resolution to get their finances on a firmer footing.