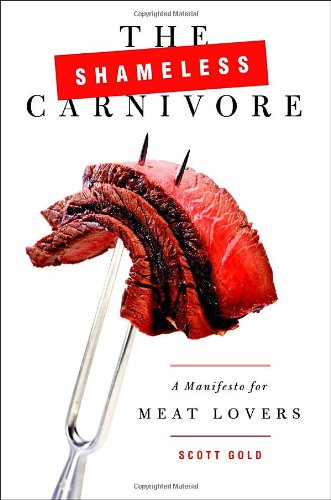 The Shameless Carnivore: A Manifesto for Meat Lovers

In his first book, former literary agent Gold sets out to probe the joys and mysteries of meat eating. According to his research, the ability to track and hunt for meat, whether hooved, clawed or winged, aided in the development of human intelligence, so we are destined to eat it. But as a carnivore with few qualms about meats, Gold is better equipped than most for this celebration of the meat-eating life. The bulk of the book chronicles his self-described month of meat, in which the author ate 31 kinds of meat in as many days. Alternating between the mundane (chicken) and the exotic (llama), he takes his culinary pilgrimage as seriously as a journey through a country or subculture, something many food writers are doing these days. The result is a hipsterish, lad-lit quasi-travelogue à la . He takes on filet of ostrich and bull pizzle, vegetarianism and veganism, and argues that the indirect effects of such ethical and dietary lifestyle choices sometimes do more harm than the decision to butcher a single animal. The last and best part of his book is the Tour de Boeuf, which takes Gold through the butchering of a live bovine to the eating of various innards and offal. Fun, though somewhat frivolous, with recipes and sidebars.