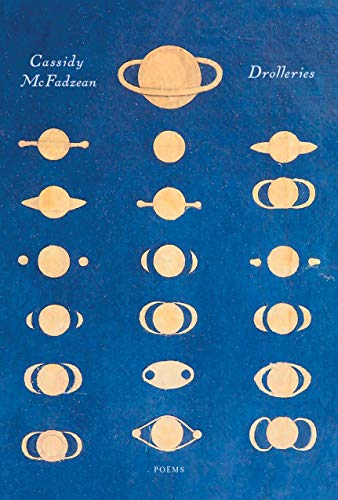 In her second collection, McFadzean (Hacker Packer) charts a collision course of myth, tarot, religion, alchemy, art, and science. The drolleries of the title (and of the Shakespearean epigraph, in which Falstaff's patter is meant to distract from an unpaid pub tab) are grotesque creatures painted in the margins of medieval manuscripts. A surreal tour through great and obscure venues ("I facetime Nathan from the Italian/ Cabinet") conjures art and curiosities that accompany the phases of a breakup. Submerging heartbreak in drollery, she launches into poems such as "the Necropants" about a sorcerer who steals human legs. Scientific exhibits are stunning, if garish, diversions: "Who else would (tastefully) place/ a child's leg in the selfsame jar/ as scorpion? Ruysch did." But in the disorienting upheaval of a Bosch landscape, a split clarifies: "if the room is closing in it's because/ it's too small for the both of us now." From marvel to horror, the marriage falters and breaks. "Catalogue" deftly embodies separation through its opposite: "I was beside you at Mount Parnassus,/ beside you at the villa of Masks/ ...I was beside you at Auschwitz-Birkenau,/ beside you in the room of hair." One might question the occasional sporadic end rhyme, and a museum docent's obsession with detail. But most here is moving, compelling, and cheeringly idiosyncratic. (Mar.)