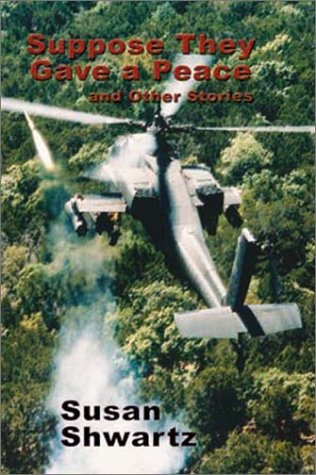 SUPPOSE THEY GAVE A PEACE: And Other Stories

In these 10 well-constructed, usually unpredictable short stories, the author of (1998) displays a wonderful grasp of history and politics as she aims at transcendent truth about the fragility of the human condition. While varying some key historical facts, Schwartz creates careful portraits of people in settings at once recognizable, immediate and imbedded in recent social dilemmas. Topics such as Vietnam, biblical dinosaurs, AIDS, WWII, Reconstruction, abuse between adults and between children, alternate partnerships, animal spirituality and the homeless form the backdrop for tales that slip into horror as they reinterpret known events and speculate about alternate results. Perhaps the best is "Loose Cannon," in which T.E. Lawrence is resurrected from his infamous fatal motorcycle crash to convince Rommel to oppose Hitler. Running a close second is the ironic title story, in which McGovern beats Nixon for president in 1972, but the Vietnam war still ends in a bloodbath after the U.S. withdrawal. In "Getting Real," the invisibility of the homeless in New York's streets is made literal in a tale of human triumph, but some of the stories amount to just plain lyrical wish fulfillment. "Critical Cats," an animal lover's story, verges on the overly cute. More than entertaining tales, Schwartz's stories are food for the mind and soul.