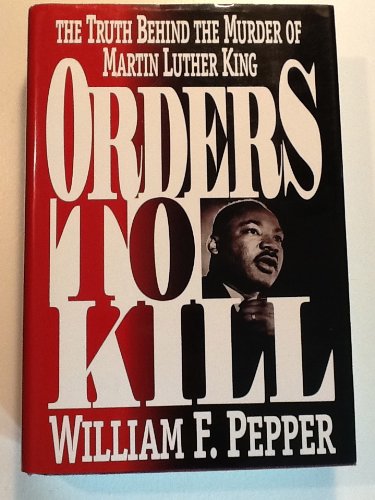 Orders to Kill: The Truth Behind the Murder of Martin Luther King

Pepper, attorney since 1988 for James Earl Ray, the convicted killer of Martin Luther King Jr., believes that his client was a patsy, not the real assassin. He charges that the civil rights leader slain in 1968 was the victim of a conspiracy that involved Hoover's FBI, the CIA, Army intelligence, the mafia and the Memphis, Tenn., police force, extending to the highest levels of the federal government, which viewed King as a dangerous revolutionary. Pepper has interviewed many new witnesses who remained silent during the last 27 years, and he names names of officials at the local and national levels who, he alleges, participated in the conspiracy. According to Pepper, a team of U.S. Army Special Forces snipers was at the scene, taking aim at King at the same moment as a back-up ``civilian'' assassin. The Army team, by this account, had orders to kill both King and the Reverend Andrew Young, but the final order to pull the trigger was never given because the ``civilian'' assassin-tentatively identified here as one Raul Pereira, not Ray-shot King first. Pepper interviewed two former Special Forces members who claim to have been part of the sniper squad. He also cites two failed, government-orchestrated attempts to assassinate King in 1965, as well as a subsequent mafia contract on the civil rights leader's life by New Orleans mob boss Carlos Marcello. Pepper wants a trial for Ray, who, he asserts, was coerced into pleading guilty by his lawyer; the defense, he notes, has never even been allowed to test the rifle or bullets in evidence. (Oct.)
close
Details