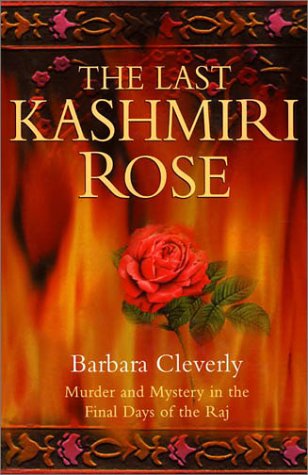 THE LAST KASHMIRI ROSE: Murder and Mystery in the Final Days of the Raj

In an impressive debut, British author Cleverly weaves an engrossing tale of serial murder and the impending decline of the British Empire into a well-written fair-play mystery set in 1920s India. Commander Joe Sandilands, a Scotland Yarder completing a stint with the Bengal Police, is on his way back home when the provincial governor asks him to look into the recent death-by-suicide of an army officer's young wife. Nancy Drummond, a close friend of the dead woman, reveals that four other officers' wives have also died—apparently by accident or misadventure—over a period of 12 years, all in the month of March. Sandilands's investigation reveals further disturbing similarities; the cause of death in each case was the victim's greatest phobia, and an unknown person has marked the anniversaries of their passing by placing a Kashmiri rose on their graves. With Drummond as his assistant and love interest, the detective probes beneath the surface of a society attempting to replicate pre-WWI England in a very different milieu. The political tensions of the time are more than mere background dressing, while the clash of cultures is instrumental to the plot. The likable and plausible Sandilands and other characters, both British and Indian, come across as living, breathing people. The killer's motivation proves to be more baffling than his identity, but the solution is satisfying, as is Sandilands's handling of the ethical issues that his uncovering of the truth has raised. Classic whodunit fans should look forward to Cleverly's future efforts.