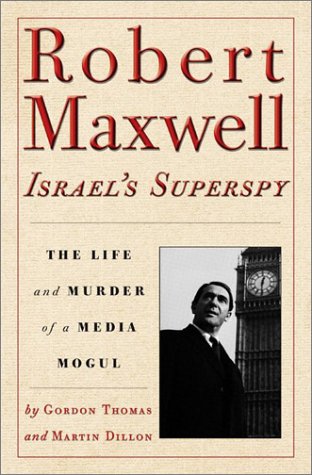 ROBERT MAXWELL, ISRAEL'S SUPERSPY: The Life and Murder of a Media Mogul

In 1991, British media tycoon Robert Maxwell died in mysterious circumstances off his yacht in the Canary Islands. The official cause of death was drowning, but this intriguing, if somewhat overreaching, investigative work argues that Maxwell died at the hands of the spy agency he worked for, Israel's Mossad. Thomas () and Dillon () have little sympathy for Maxwell—they build an unflattering portrait of an overweight and vain man who rose from a pre-WWII Jewish childhood in Czechoslovakia and England to become one of the world's most powerful media barons. Using a wealth of international sources—Israeli and British intelligence, for instance, both named and anonymous—the authors argue that Maxwell helped the Mossad steal intelligence-gathering software from the U.S. and then sold it around the world. They also depict Maxwell's involvement in several other international intrigues, including an attempt to involve the Jewish state in the 1991 coup against Mikhail Gorbachev. Much of the book has a breathless tone, particularly when the authors describe, in detail, the night of Maxwell's death. The Mossad "whacked" Maxwell, they say, because he tried to extort money from them to get out of debt. Some readers might find the depiction of the Mossad at times hard to believe, such as the suggestion that the spy agency was entangled in the death of Sen. John Tower. But those interested in the world of international intrigue will find themselves engrossed. 8 pages of b&w photos not seen by .