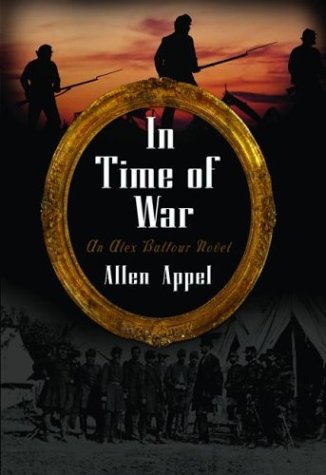 IN TIME OF WAR

This lightweight and fun fourth installment in the Alex Balfour series finds intrepid but unwitting time traveler Alex Balfour plopped in the middle of a Civil War battle. Immediately wounded, Alex survives thanks to an anonymous boy who provides him with a slain Union officer's papers. Alex soon finds himself installed in a Washington hospital, where, in spite of the teeming capital's chaos, he immediately meets Ambrose Bierce and Walt Whitman and spots John Wilkes Booth. Alex's pregnant reporter girlfriend, Molly, is also unwillingly spirited back in time to join him. She soon finds herself in a Washington brothel, where she works as a "seer" and a curiosity. As the plot moves forward, Alex and Molly find themselves variously imprisoned, chased and otherwise subjected to danger, at least some of which is orchestrated by Alex's nefarious father, who is also time traveling. Driven often by coincidence, the story takes second place to colorful, wide-eyed descriptions of period habits—Molly squeezes herself into a corset; Alex marvels over a salad of poke weed and purslane—and a good bit of speechifying. In chatting with the madam of the brothel, Molly asks, "Don't you ever imagine a future where men and women are equals intellectually and professionally?"; she also sets Bierce on his literary path by applying her notions of contemporary rhetorical style to his smoky Victorian prose. That there will be an attempt to thwart the assassination of Lincoln is a foregone conclusion, but other intrigues distract the time-crossed lovers often enough to keep the story rolling. Though Appel's rather sanitized, politically correct view of the period may make history buffs squirm, those in search of exuberant Civil War–flavored entertainment will find much to enjoy here.