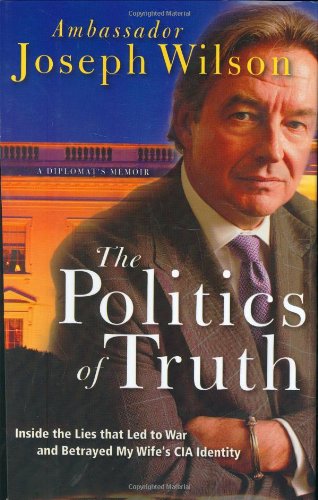 THE POLITICS OF TRUTH: Inside the Lies That Led to War and Betrayed My Wife's CIA Identity: A Diplomat's Memoir

Nobody who's paid close attention to the unfolding story of the leaking to columnist Robert Novak of the name of Ambassador Wilson's wife as a CIA operative will be surprised by the two White House staffers—Lewis "Scooter" Libby and Elliott Abrams—Wilson proposes as the most likely suspects in what he calls the "organized smear campaign" against him. He views the leak as retaliation for his presenting evidence that, contrary to President Bush's 2003 State of the Union assertion, Iraq was not trying to buy uranium from Niger. Wilson hits back hard with a righteous anger against those who would jeopardize national security to score political points. By the account of this longtime Foreign Service officer who was in Baghdad in the months leading up to the first Gulf War, Wilson stood up to Saddam Hussein in a showdown that now makes for one of the memoir's most stirring sections. In fact, readers will discover this book to be a vivid, engrossing account of a foreign service career that spans nearly three decades. Wilson is a lively storyteller with an eye for compelling visual detail and brings a welcome insider's perspective on the political situations of African nations where he has served. He's equally honest about the toll his professional commitment has occasionally taken on his personal life. And it's that candor, as well as the respect shown for previous administrations of both parties, that helps make his charges against the current president's advisers difficult to brush off. His revelations should fly off the shelves. 3 maps, 16 pages of b&w photos not seen by . )