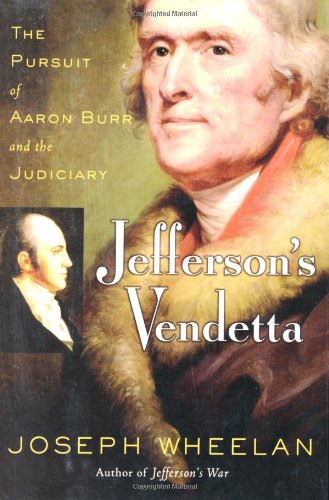 JEFFERSON'S VENDETTA: The Pursuit of Aaron Burr and the Judiciary

Thomas Jefferson is depicted here as a venal and vindictive opportunist who, during his second term as president, attempted to abuse the federal judicial system to persecute his one-time vice-president and chief political rival, Aaron Burr. Conversely, Wheelan, a former editor and reporter with the AP, renders Burr as a complex, flawed politico who stood in the dock charged, excessively, with treason after a misguided attempt to conquer Spain's holdings in North America and establish a rival American republic. The man Wheelan shows running interference between these two founding lions is the only true hero in the narrative: Supreme Court Chief Justice John Marshall. Partisans for either Jefferson or Burr may debate Wheelan's portrayal of their respective heroes, but they are bound to come out agreeing with the author that Marshall—whom Jefferson hated with a ferocity rivaled only by his feelings against Burr—seized and saved the day during the trial. Burr was acquitted in 1807 thanks to Marshall's strictly interpreting the Constitution's definition of treason, ensuring through his opinion that similar unfounded charges could never again be used by a president against a political enemy. Wheeler ( ) offers an elegantly written and smartly conceived revisionist history that is sure to engage and entertain.