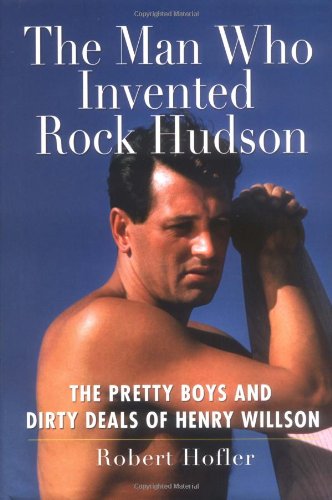 The Man Who Invented Rock Hudson: The Pretty Boys and Dirty Deals of Henry Willson

Those who think Hollywood's current predatory political scene and celebrity partner-swapping activities are new phenomena would be wise to dive into this tell-all tale of Henry Willson, an agent who became a major star maker to actors like Rock Hudson, Tab Hunter and Troy Donahue in the 1950s. Rapacious, ambitious and fond of a sex-for-roles strategy, Willson (1911–1978) is a compelling character worthy of this extensive biography. His story, too, illustrates the rise of the studio star system, in which actresses were pimped out to movie executives by their agents, and actors married to cover their homosexual liaisons. Hofler, a former senior editor now the publication's theater reporter, delves into this shadowy, sometimes seamy world with particular relish, and his writing has all the sizzle of the films his subjects starred in. He includes interviews with a number of Hollywood insiders (Roddy McDowall and Shirley Temple Black, to name two), and shows remarkable sympathy for Willson, offering a glimpse into a man and an era that may be past, but whose effects linger still. Photos. .