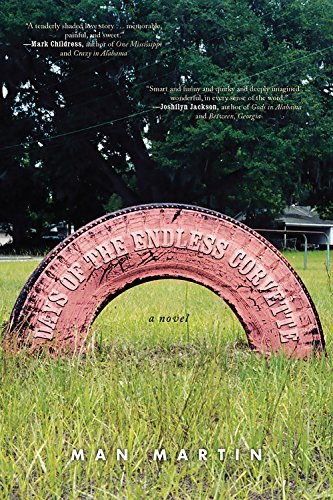 Days of the Endless Corvette

Martin’s first novel leisurely unfolds in the manner of Southern tall tales and oral tradition, imparting magic and meaning into smalltown 1970s Georgia. Earl Mulvaney, a clueless but kindhearted high school dropout whose facility as a mechanic is nearly supernatural, is in love with the bookish girl next door, Ellen Raley. Their short-lived romance is interrupted when Ellen discovers she’s pregnant with her previous beau’s child. Ellen marries Troy, the lovable football player who subsequently becomes Earl’s best friend, and Earl goes to work for a used car dealer whose ideas about the evolution of cars makes him the ideal benefactor for Earl’s plan to build a Corvette out of leftover parts. Though Earl and Ellen remain in love, they content themselves with memories, daydreams and secret notes passed via books checked out from the library. Told from the perspective of the town librarian (whose reliability is questionable—he is convinced he once saw a brontosaurus), the novel has a folkloric patina of exaggeration that renders the characters’ quirks and foibles endearing rather than forced, though the pacing can grind to a halt. Martin’s debut novel is a grand if meandering charmer. (June)