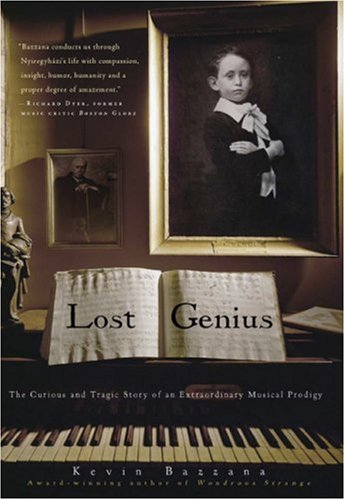 Lost Genius: The Curious and Tragic Story of an Extraordinary Musical Prodigy

Ervin Nyiregyházi (1903–1987) dazzled concert audiences in the early 20th century with his volcanic performances, playing so intensely that his fingers bled on the keys. Alas, his keyboard virtuosity was drowned out by a discordant symphony of neuroses. Unable even to tie his shoes properly, Nyiregyházi, who was born in Budapest, Hungary, and settled in L.A., wrestled with crippling stage fright; drank and womanized compulsively (his seventh wife was a prostitute he met six days before marrying her in Vegas); exhausted others with his neediness, paranoia and grandiose posturing; and sabotaged a potentially brilliant career in the name of artistic purity. Bazzana, biographer of eccentric pianist Glenn Gould, follows Nyiregyházi's life from early acclaim through decades of poverty, obscurity and debauchery to his brief, celebrated comeback in the 1970s as the “skid row pianist.” Although Bazzana can be reductionist—he diagnoses Nyiregyházi with borderline personality disorder brought on by a domineering stage mother—he tells this lurid story sympathetically, without excusing Nyiregyházi's excesses. Even better, he writes about his subject's music in a lucid and evocative way. A tormented, self-destructive artist and the creator of thrilling, emotionally supercharged music, Nyiregyházi is, in Bazzana's compelling portrait, a study in the upside and downside of romanticism. Photos.