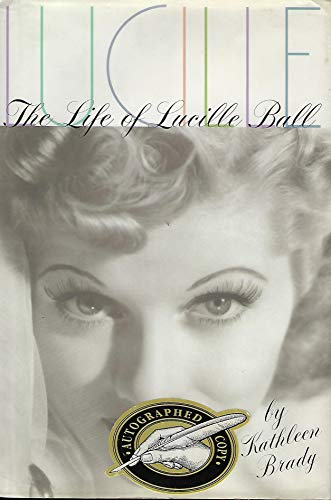 Lucille: The Life of Lucille Ball

Featured mainly in B-movies in the 1930s at RKO, leading lady in several MGM films in the '40s, Lucille Ball was never a ``star,'' but she became the Queen of TV with I Love Lucy, first aired in 1951. In this evenhanded, serious look at America's beloved comedienne, Brady describes how, under Buster Keaton's tutelage, Ball developed her talents, and how her husband's womanizing led her to conceive the TV series ``because it would keep Desi at home.'' Brady's biography is a narrative roller coaster veering from heartache to terror to triumph as she depicts Ball as actress, wife, mother and producer. The terror occurred during the McCarthy era, when she was investigated-then cleared-by HUAC. Desi Arnaz is shown as an astute businessman who, in tandem with his wife, became successful enough to buy the studio where their series was produced, Desilu Studios. Ball's outrageous behavior after her last series, Here's Lucy, ended in 1974 and her struggle against aging are recounted in doleful detail. Ball died in 1989 at the age of 78 but, as Brady remarks, ``Lucy Ricardo'' achieved eternal life. Fans will appreciate the profusion of I Love Lucy lore and trivia. Brady is co-chair of New York University's Biography Seminar. Photos. (Nov.)
close
Details