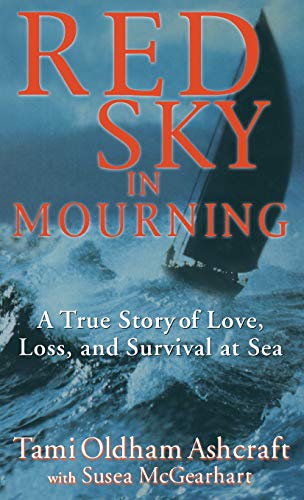 RED SKY IN MOURNING: A True Story of Love, Loss, and Survival at Sea

Experienced boaters, Ashcraft and her fiancé, Richard Sharp, had been hired to ferry the four-masted from Tahiti to the U.S. mainland. The jaunt seemed simple enough, until the pair unwittingly sailed into the throes of a hurricane. Sent below decks during the worst of the storm, Ashcraft was knocked unconscious; when she awoke 27 hours later, all that remained of Richard was his broken safety tether. Thus began Ashcraft's horrifying 41-day solo journey toward civilization, which makes up the bulk of this book. Having lost all radio contact, Ashcraft made the best of her rudimentary celestial navigation skills and sailed for the shores of what she hoped was Hawaii. Facing fatigue, injury and almost certain death, Ashcraft suffered a near mental breakdown. She survived on canned food, beer and cigars, endured minor squalls and mirages of ships on horizon and was finally rescued off the coast of Hilo by a Japanese touring vessel. As she recounts her story, Ashcraft emerges as a fiercely independent, strong sailor (she is now a 100-ton licensed captain with more than 50,000 offshore miles). Some will find the self-consciously inspirational tone of the book a little too saccharine, but others will appreciate Ashcraft's remarkable courage; in any case, the story certainly has enough adrenaline-pumping action to satisfy nautical adventure junkies. ()