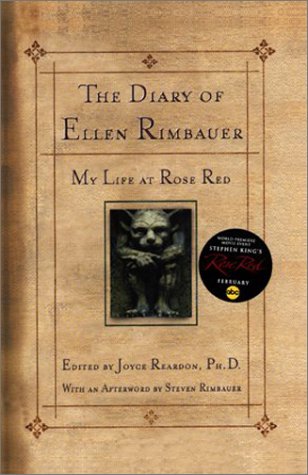 THE DIARY OF ELLEN RIMBAUER: My Life at Rose Red

A mysterious and haunting spirit lurks within the walls of Rose Red, the setting for Stephen King's upcoming ABC miniseries tie-in by the same name. Built on a Native American burial ground in early 20th-century Seattle, the mansion—which is constantly under construction—sets the scene for a multitude of inexplicable disappearances and ghastly deaths. While moody oil tycoon John Rimbauer refuses to acknowledge that the house has a mind of its own, his young wife, Ellen, dramatizes these eerie events with great detail in her diary, often personifying the house as if it were a living being. (Or, perhaps, a -living being?) While the evolution of Ellen's character from innocent and submissive to frighteningly powerful is a slow process, the language and questioning nature of her entries entice the reader as the mystery of Rose Red is brought into full bloom. Ellen also reveals frustration and disappointment with her marriage—namely her husband's unfaithfulness and alarmingly frequent involvement in voyeuristic activities—as well as a growing confusion about her sexual identity and attachment to her friend and African handmaid, Sukeena. In addition to extensive dialogue that makes the diary seem a tad more like a novel than someone's personal confessions, Ellen's entries are accompanied by a handful of explanatory notes put in by the "editor" and supposed professor of paranormal studies, Joyce Reardon. The people mentioned in the diary, as well as Reardon, are all characters in , which was created directly for television by the bestselling author. As to who penned the actual of the diary? That remains as much of a mystery as Rose Red herself.