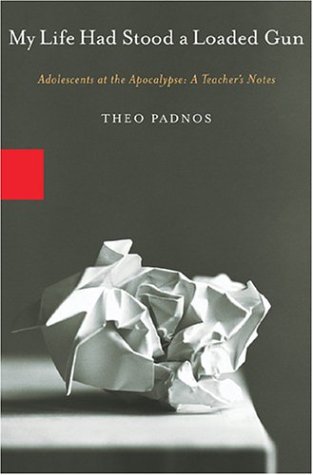 MY LIFE HAD STOOD A LOADED GUN: Adolescents at the Apocalypse: A Teacher's Notes

For a year and a half (1999–2000), Padnos was a part-time instructor at Vermont's Woodstock Regional Correctional Facility, a jail for "inmates... waiting for sentences to be handed down, or for trials to begin or plea bargains to be worked out." His gothic American writers syllabus gives way to a new syllabus: "menace and violence in the American landscape." These musings, accompanied by Padnos's students' usually scatological commentary, make the author appear to be an ex–teaching assistant show-off, as he explains how he handles literature, including some Baldwin and Bowles, a bit of Whitman and Dickinson, lots of Raymond Carver and lots and lots of Stephen King. Padnos appears in other parts of the book as one of the inmates' pals (or perhaps even a wannabe), flaunting pot smoking, afflicted with more than a touch of voyeurism, absorbed in the newspaper accounts of inmates' crimes and wanting to know more about their "life on the outside." It's a patchy mix, as Padnos shares more and more chunks of his "jail diary," a work too aptly described by the author as "hardly writing at all.... It involved not an instant's worth of thinking." Although Padnos describes the jail as "overrun with rural pedophiles and drunk drivers," he's absorbed with the grislier tales. An obsessive interest in Lance Stanard (who murdered his mother) occupies the book's center, augmented by Padnos's interest in the teenage murderers of two Dartmouth professors in May 2000. "Maybe too zealously interested," Padnos says, even "becoming a little unhealthy, a little repetitive."