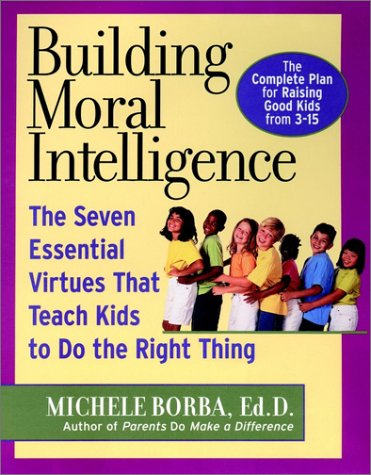 BUILDING MORAL INTELLIGENCE: The Seven Essential Virtues That Teach Kids to Do the Right Thing

Television, games, the Internet, peers and other forces shape children's morality, but consultant and educator Borba () argues that it is parents who provide the most enduring modeling and instruction. Kids, she asserts, should be fortified against the onslaught of increasingly negative cultural influences—violent video games, nasty music lyrics—by parental involvement and guidance. Designed as a guide for parents and caregivers of children from three to 15 years old, the book describes an epidemic deficiency in the moral development of American kids and outlines seven virtues (Empathy, Conscience, Self-Control, Respect, Kindness, Tolerance and Fairness) to be engendered in children. Devoting an identically designed chapter to each virtue, she defines the virtue in accessible and secular language. She then provides a test for parents to assess their children and offers practical actions parents can take on a daily basis. Throughout, her tone is pragmatic and optimistic. She advises parents to make sure they are providing a moral example that they would want their children to follow—in other words, watch their own behavior. She advises parents to be direct about their own moral beliefs and encourage specific virtuous behaviors. Borba concludes the book with a helpful resource list. A packed storehouse, this helpful, informative and hopeful book will be dog-eared over years of consultation. ()