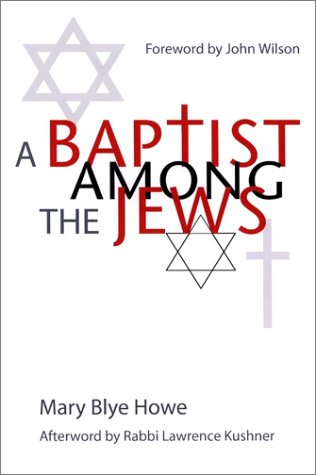 A BAPTIST AMONG THE JEWS

No religious group has angered American Jews more than Southern Baptists, whose leaders have repeatedly launched initiatives to convert Jews to Christianity. Howe, a practicing Southern Baptist, had no such intention when she joined a Jewish philosophy study group. Soon her interest in Judaism led her to Orthodox, Conservative and Reform services, to holy day celebrations and a Torah retreat, and to Hasidic and Jewish Renewal study groups. As she befriended Jews of all persuasions, from fervent Hasids to a vibrant female rabbi, Howe found herself in a "love affair with Judaism," reveling in its dedication to study, passion for God, sense of divine mystery and "wild and joyful" celebrations. Though the book is based on Howe's personal experience, it is also rich in description and reflection as she looks at women in Judaism, historic and contemporary Hasidism and her own expanding view of God. In the end, in spite of hoping that she has a Jewish soul, Howe remains a Baptist: "Were I to become a Jew, I feel I'd have to throw myself heart and soul into that faith tradition, when what I want in my life right now is to throw myself heart and soul into experiencing God in as many ways as I can." Can a Baptist successfully portray contemporary Jewish life and worship? Evangelical Christian editor John Wilson, in the foreword, and Reform Rabbi Lawrence Kushner, in the afterword, believe Howe has done so, and each recommends the book to his own community.