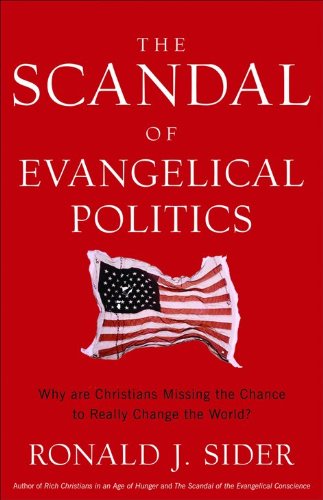 The Scandal of Evangelical Politics: Why Are Christians Missing the Chance to Really Change the World?

Sider, author of , offers the most balanced and thoughtful example of the recent spate of books on evangelicals in politics. Rather than telling evangelicals how to vote, he teaches them how to think, using biblical and historical examples as well as contemporary findings to persuade his readers. When evangelicals entered political life in great numbers in the 1970s and '80s, he says, they did so without careful judgment; their approach was “Ready. Fire. Aim.” This book can be seen as a kind of remedial course, exploring when and why political action is important for Christians. It offers a methodology of ethical discernment rather than a laundry list of hot-button issues, though Sider does tackle tough questions such as abortion, same-sex marriage, environmentalism and what constitutes a “just” war. While he supports democracy and a free market economy as the two best devices for promoting fundamental human rights for the greatest numbers of people, he argues that Christians need to concern themselves more with “the least of these”—the poor and disabled who often get trampled when materialism is unchecked. Powerful, well-researched and timely, Sider's book has the potential to shape a new generation of evangelical activists.