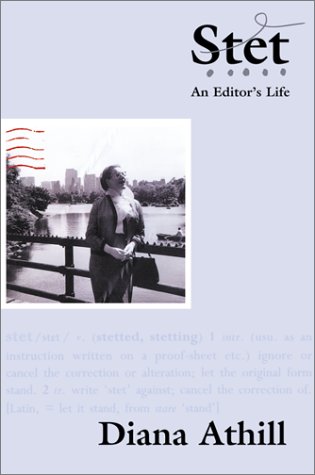 For nearly 50 years, Athill edited some of the best minds of the postwar generation, including Molly Keane, Jack Kerouac, Norman Mailer, Brian Moore, V.S. Naipaul, Jean Rhys, Mordecai Richler, Philip Roth, Gitta Sereny and John Updike. A founding director of the now-defunct London publishing house Andre Deutsch Ltd., Athill ""intervened"" with legendary taste and self-restraint, earning her the loyalty, and sometimes the friendship, of her frequently tetchy, fragile authors (""Writers don't encounter really attentive readers as often as you might expect, and find them balm to their twitchy nerves when they do; which gives their editors a good start with them""). Athill, now an exuberant 83, looks back on her half-century in the business, beginning with her wartime fling with Hungarian ex-pat Andre Deutsch. The affair was brief, but the relationship flourished, as the two founded first Allan Wingate (which ""pounced"" to publish The Naked and the Dead) and then, in 1952, the house that bore both Deutsch's name and the stamp of his ego. Dealing with his temper and self-indulgence prepared Athill for playing ""nanny"" to a series of difficult writers, chief among them the ""ugly drunk"" Rhys; Morris Chester, an all-but-forgotten surrealist novelist plagued by ""voices""; and Naipaul, whom Athill categorizes as the petulant and depressive. Cheerfully self-effacing as editor and friend, Athill offers few details of her personal life. But on the subject of her workplace and the ""Interesting People"" she met there, she is unfailingly candid, generous, witty and astute, an eyewitness with a famously discerning eye. Agent, Angela Rose, Granta Books, London. (Mar.) Forecast: Publishing insiders and the literarily curious will find Athill's portraits of leading contemporary authors irresistible. That won't translate into major sales, but it does offer an opportunity to enterprising booksellers, who may find happy results if they display this title along with Jason Epstein's forthcoming Book Business.
close
Details