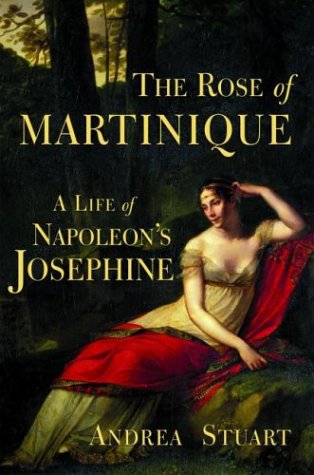 THE ROSE OF MARTINIQUE: A Life of Napoleon's Josephine

Born in Martinique, her name was Rose when she arrived in France at age 15 to marry her first husband, a handsome man-about-court who quickly neglected his disappointingly provincial wife. Rose matured and built alliances in unlikely places, including the convent where her husband forced her to retire and the prison where she spent the last months of the French Revolution. It was after this period and her husband's execution that she became one of Paris's great hostesses and attracted the attention of an awkward but rising military hero named Napoleon Bonaparte. Stuart ( ) captures the tentativeness of their first years of marriage, when letters of the often-absent, sexually inexperienced Napoleon raged with jealousy while Rose, whom he renamed Josephine, continued to have the affairs common in her social circle. Sources provide a challenge to the biographer, who must wade through material written much later when writers were fully aware of the importance of the actors and scenes they described. The twin dangers of contemporary romanticization and criticism haunt Stuart's text, yet the shifting sands of identity they create seem appropriate, for Rose and Napoleon were both remaking themselves. The almost pathological ways they complemented each other remain painfully clear as Stuart traces the denouements of their lives. It was hardly a happy marriage, and Stuart's argument that the emperor's harsh treatment of women in the Code Napoléon reflected the dynamics and frustrations of his own marriage seems quite convincing in this context. 16 pages of color illus. not seen by .