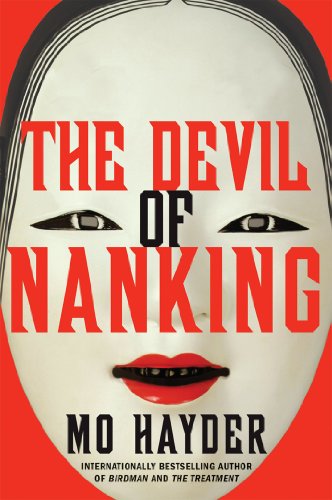 THE DEVIL OF NANKING

From its start in 1937, as the Japanese overrun the Chinese port of Nanking and massacre hundreds of thousands, to its narrative core in 1990, as a disturbed young British woman who calls herself Grey searches for the hidden truths that made her the mentally fragile person she is, Hayder's third book (after 2002's ) is a thriller of rare art and gripping excitement. Hayder, one of the rising stars of British crime fiction, teaches at a university in Bath and has worked as a hostess in a Tokyo nightclub. Both experiences add to her book's unusually rich atmosphere. Grey, who lives on the fringes of the academic world, tries to find out in Tokyo whether a piece of 16mm film taken during the Nanking atrocities actually exists—and whether it will ease her pain. When an elderly Chinese professor, a survivor of Nanking, at first refuses to help her, she drifts into a well-paying job as a night club hostess. (Russian twin sisters Irina and Svetlana teach her the tricks of the trade. "You gotta look sophisticated," Svetlana tells her earnestly. "You wanna wear my belt, eh? My belt is gold. Black and gold nice!") Eventually, the story becomes a beautifully paced, three-way duel among an aged Japanese gangster who wants to live forever; the Chinese professor, with secrets too horrible to hide any longer; and Grey, a courageous young woman unlike any other heroine you're likely to find in a thriller.