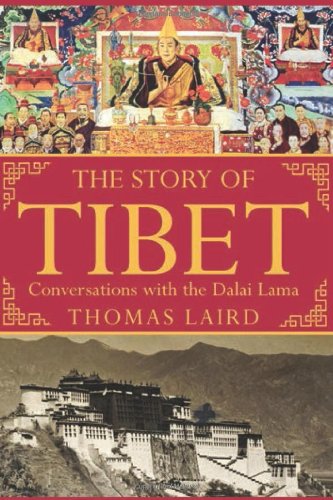 The Story of Tibet: Conversations with the Dalai Lama

In a tenderly crafted study that is equal parts love letter, traditional history and oral history, Laird chronicles the development of Tibet from its mythic origins to its takeover by Communist China in 1950. Weaving historical research with interviews with the Dalai Lama, Tibet's exiled leader, veteran journalist Laird ( ) offers insight into the triumphs and failures of the country. In one particularly fascinating section, the Dalai Lama expresses reservations about the truth of the Tibetan creation myths involving a demon and a monkey and accepts Darwin's theory of evolution as the most logical explanation of the origins of humankind. Laird traces Tibet's sometimes tortured relationships with China and India, recounting the country's conflicts with the Mongols and the Manchu Empire, as well as its struggles for independence in the face of Chinese occupation. The Dalai Lama also recounts his early life; vividly recalls his first meeting, at age 19, with Mao Zedong; and reflects on his years in exile and his hopes for Tibet to be freed from occupation. Throughout, Laird's colorful and lively writing brings to life thousands of years of Tibetan history, inviting the reader on his journey to a strange and wonderful land. 16 pages of color photos.