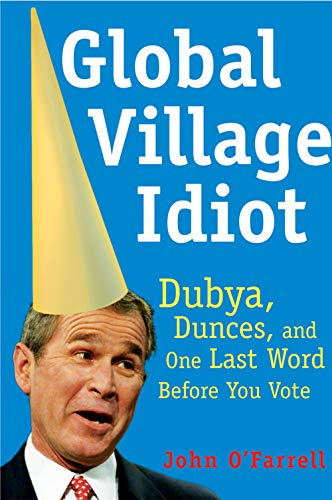 GLOBAL VILLAGE IDIOT: Dubya, Dumb Jokes, and One Last Word Before You Vote

Satirist O'Farrell is the U.K.'s answer to Dave Barry (he was named Best Columnist of the Year at the British Liars' Awards and contributed to the screenplay of ). He collected his caustic columns from the for U.K. publication in 2001 and now offers a "slightly different version" for American readers. The cover shows Bush wearing a dunce cap. ' 'I've had gym teachers smarter than George W. Bush.... When Dubya takes his seat in the Oval Office the global village will finally be complete," O'Farrell wrote three years ago. "At last it will have its own global village idiot." But Bush isn't O'Farrell's only target, and the satirist doesn't deal in idle whimsy. He unleashes devilish darts across the full sociopolitical landscape, covering such topics as fox hunting, in vitro fertilization ("Who was the first baby ever to be produced through IVF? Why, Jesus Christ himself of course"), the high-tech war on terrorism ("Soon NATO forces will be able to blow up the wrong building far more quickly than they have been able to do in the past"), McDonald's and boxing ("Mike Tyson remains a role model for thousands. Where I live in South London far more young working class men have named their pet Rottweillers 'Tyson' than say, 'Chomsky' "). Most readers left of center will appreciate O'Farrell's humor; for them, the hilarity is so thorough that even the closing "Note on the Type" brings chortles.