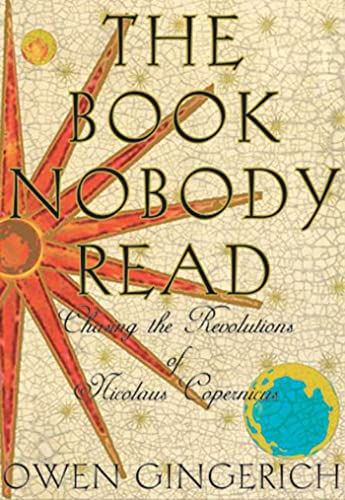 THE BOOK NOBODY READ: Chasing the Revolutions of Nicolaus Copernicus

In 1543, Nicolaus Copernicus, astronomer and "Catholic canon at the Frauenburg [Poland] cathedral," published (On the Revolutions of the Heavenly Spheres), one of the world's greatest and most revolutionary scientific works, explaining that the Earth revolves around the Sun rather than the reverse. Yet many have wondered if this dense and very technical book was actually read by the author's contemporaries. Arthur Koestler, in his bestselling history of astronomy, , called it "the book that nobody read." Gingerich, a Harvard astrophysicist and historian of science, proves Koestler wrong. Gingerich went on a quest to track down every extant copy of the original work, and he does a fabulous job of documenting virtually everything there is to know about its first and second (1566) editions, conclusively demonstrating the impact it had on early astronomical thought. As thoroughly engaging as a good detective story, the book recreates the excitement Gingerich himself felt as he traveled the world examining and making sense of centuries-old manuscripts. There is a rich discussion of techniques for assessing treasures of this sort. Handwriting analysis of marginalia, for example, enabled Gingerich to determine who owned many of the copies and to document how critical new ideas spread across Europe and beyond, while an examination of watermarks and glue helps demonstrate whether books have been altered. Providing great insight into 16th-century science, the book should be equally enjoyed by readers interested in the history of science and in bibliophilia. 8 color, 35 b&w illus.