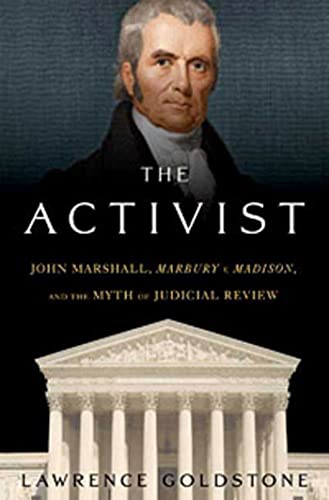 The Activist: John Marshall, Marbury v. Madison, and the Myth of Judicial Review

The author's voice is never far from the surface in this sprightly study of the circumstances surrounding the Supreme Court's epochal 1803 decision in v. that declared an act of Congress unconstitutional. Chief Justice John Marshall's reasoning was “laughable,” Goldstone says in characteristically unbuttoned language. Yet popular historian Goldstone ( ), who has a Ph.D. in American constitutional studies, also has to acknowledge Marshall's statesmanship and political brilliance in his decision, a maneuver against the new Democratic-Republican president Jefferson by the Federalist Marshall. The result is a readable, if opinionated, tour of the origins of judicial review. It's hard to make sense of the term “myth” in the book's subtitle, given that judicial review has become the basis of American constitutional law. Still, the book is a valuable review of a complex subject. It also has relevance for today, when, as Goldstone claims, “originalist” judges, in the name of adhering strictly to the words of the Constitution, use judicial review, which is not in the Constitution, to inconsistently strike down laws. 20 b&w illus.