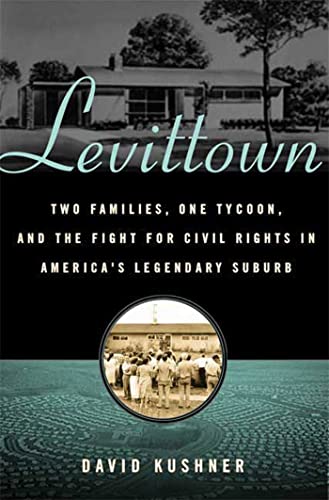 Levittown: Two Families, One Tycoon, and the Fight for Civil Rights in America’s Legendary Suburb

Migration to suburbia has long been an American ambition, but its allure was never stronger than in the post-WWII years, when the fantasy of a dream house played to the imagination of millions of Americans, especially returning veterans. Already waiting for many of them was a model community on the North Shore of Long Island called Levittown, the brainchild of Abraham Levitt and his sons, William and Alfred, the nation’s first real estate tycoons. But Levittown came with its own set of requirements: perfectly manicured lawns, no fences and no black families. In 1957, as the Levitts—by now massively successful and nationally lauded—had already expanded to a second model city, two families challenged the segregationist policy: one, a white Jewish Communist family, secretly arranged for the other, a black family, to buy the house next door. In an entertaining round-robin format, Kushner relays each party’s story in the leadup to a combustible summer when the integration of America’s most famous suburb caused the downfall of a titan and transformed the nation.