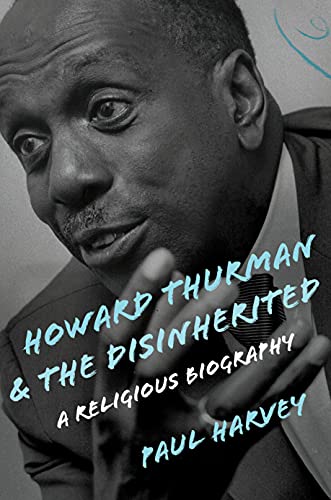 Howard Thurman and the Disinherited: A Religious Biography

Harvey (Bounds of Their Habitation), professor of history at the University of Colorado, offers an illuminating account of the life and legacy of Howard Thurman (1899–1981), the grandson of a slave who became a well-known preacher, teacher, author, mystic, and mentor to a generation of civil rights activists. Harvey recounts Thurman’s drive for educational advancement despite numerous obstacles—his hometown of Daytona, Fla., lacked a high school for Black students—and the learning and leadership opportunities he pursued at the YMCA, Morehouse College, and Rochester Theological Seminary. Later chapters cover Thurman’s six-month trip to India in 1935 as part of the American Christian Student Movement’s “Negro delegation,” during which he met Gandhi; his career as dean of the chapel at Howard University and, later, Boston University; and his efforts to establish an interracial church in San Francisco. Harvey astutely unpacks the development of Thurman’s understanding of Christian faith, which was greatly influenced by the spirituals and Quaker thought, defied Baptist orthodoxy, incorporated mysticism and pacifism, and led to his seminal work, Jesus and the Disinherited, which influenced Martin Luther King Jr. This should go far to raise the profile of a lesser-known spiritual leader whose writings, sermons, and mentorship helped lay the foundation for the civil rights movement. (Oct.)
close
Details