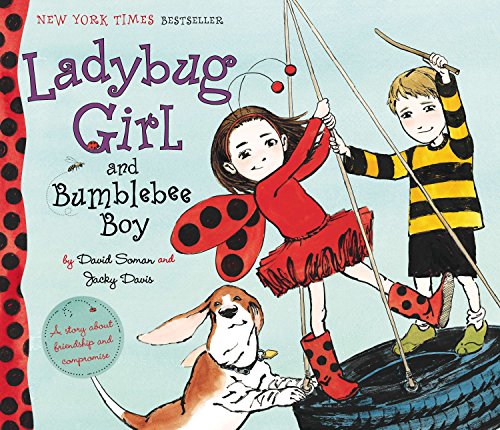 What's a superhero without a sidekick? Lulu, star of last year's , meets her friend Sam at the playground, but before they can join forces, they must first agree on what to play—a sequence handled with understanding and humor. At one point, Lulu hits on the idea of using the seesaw: “She runs over and sits down on one side of the seesaw and waits. And waits. Sam just stands there, not getting on.” Ultimately, intrigued by Lulu's suggestion of a game involving superpowers, Sam becomes Bumblebee Boy, with his striped shirt and a stick for a stinger. Together they battle the Mean Robot (tire swing) that threatens to “crush the playground” (“Ladybug Girl grabs on, and jumps on top of its head! Bumblebee Boy stings it with his stinger again and again”) and attract some new heroes, too. Soman's pen-and-ink characters are remarkably emotive—this is a story that delights in children's enthusiastic imaginations. Also noteworthy is the team's pacing: there's no dead air, and all the action plays naturally. A favorite series in the making. Ages 3–5.