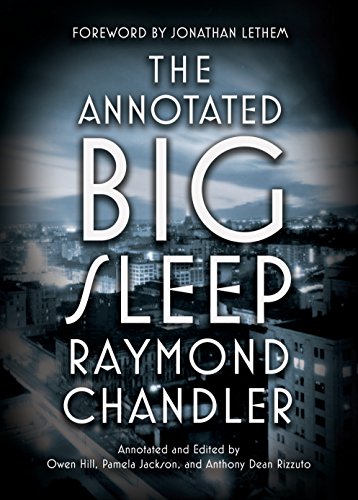 Nearly 80 years after its original publication, Chandler’s iconic debut novel finally gets the scholarly treatment it deserves with this superb, lovingly annotated edition. The enduring 1939 tale of blackmail and corruption introduced readers to private detective Philip Marlowe and remains one of the most influential novels in American literature, inspiring countless books and films. The publisher has enlisted three editors to provide notes—a poet/novelist/bookseller, an English professor, and a librarian/scholar—and the result is a thorough, interdisciplinary approach that enriches and informs the text.

For readers already well-acquainted with the book, the annotations force us to slow down and consider the historical context in which it was conceived. Drawing from contemporary newspaper accounts of crimes, as well as bits of cultural archeology from period Los Angeles, the notes reveal the psychological toll of the boom-and-bust rise of the city, the dark underbelly of Hollywood, the racial and sexual attitudes of the era, and the widespread corruption that seemed to permeate all aspects of society, from the scions of industry to the LAPD.

Details from Chandler’s biography—from his classical education in England, combat experience in WWI, and his early career as an oil company executive—are referenced in depth. Special attention is also paid to Chandler’s lifelong trouble with alcohol. The editors wisely draw on the treasure trove of revealing letters that Chandler left behind for insights into his work. As novelist Jonathan Lethem points out in his enlightening foreword, Chandler “somehow stands inside and outside of his own creation simultaneously,” with an ear to the mean streets but the refined sensibility of the drawing room.

The notes pay due attention to Chandler’s language, his love of the American idiom, and his creation of a highly stylized vernacular that has often been imitated but never quite duplicated. The era’s lively underworld slang had a profound influence on Chandler, and the editors emphasize the importance of Prohibition and the criminal subculture it created. While Dashiell Hammett’s tough, terse dialogue was the perfect fit for his own, more realistic Continental Op and Sam Spade, Chandler’s vivid, descriptive prose and his scalpel-edged similes define his own hero. Inspired by classical antecedents, Philip Marlowe, his creator acknowledges, is a “fantastic creation” that “does not and could not exist. He is the personification of an attitude, the exaggeration of a possibility.” For a generation that had just survived the Depression and was about to endure the horrors of WWII, this kind of protagonist—the man who knows the score but still tries to act with honor and decency in a fallen world—was exactly the kind of hero that was needed. As this exhaustively researched edition shows us, Chandler’s vision is just as relevant today as ever.

Patrick Millikin is the editor of the anthologies Phoenix Noir and The Highway Kind.