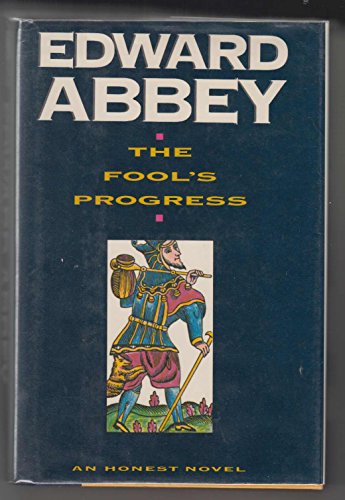 The Fool's Progress: An Honest Novel

Abbey has won a devoted following with such caustic meditations as Desert Solitaire and anarchistic novels like The Brave Cowboy and The Monkey Wrench Gang. None of them, however, could adequately have prepared one for The Fool's Progress , an epic exploration of Abbey's passionate loves and hatreds, set forth in a wild, picaresque novel that reads at times like a combination of Thomas Wolfe and Jack Kerouac. Henry Lightcap is a woodsman's son from a remote corner of West Virginia who has dedicated his life to nature, music, literature and the pursuit of booze and lovely women. He works only as he has to, to afford the things he craveswhich do not include any of the material products of our culture except for the necessary vehicles for his constant wanderings. Like Abbey himself, Lightcap has spent much of his 53 years in the wilderness of the American West, as park ranger or fire watcher, and is at once passionately devoted to the land and full of rage at what late 20th century America has done to it. At the beginning of the book one of his several wives has walked out on him. Typically, Henry shoots the refrigerator, then gathers up his dying dog and begins a despairing odyssey across a lovely but ruined land from Tucson to the Appalachian family farm still run by his brother; penniless, he has nowhere else to go. Along the way we learn of his childhood, his father, his women, his Army experiencesand receive two huge narrative surprises, of a kind not easy to bring off in a book that is essentially a road novel with flashbacks. One involves the only real love of Henry's life, a tale told with aching tenderness and anguish; the other embraces his very existence. At his best Abbey writes with fierce eloquence of landscape and city, of stunted souls and drunken despair; he can be funny and poignant at once, and describes violent action with horrid vividness. At his worst he gets hyperbolic and full of bile, and a savage streak of male chauvinism surfaces. But Henry, and what he represents, seizes hold of the imagination, so that the reader is carried along as irrevocably as Henry's battered truck, lurching along interstates and fading country roads to a windup as absurdly moving as anything you have read in years. 50,000 first printing; author tour. (October)
close
Details