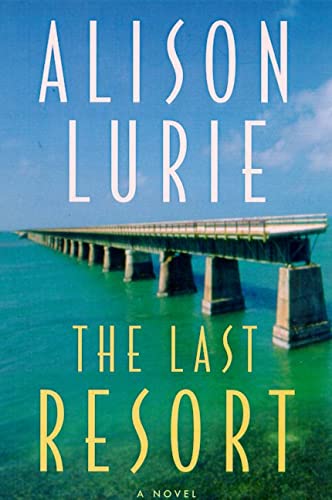 It's been much too long--10 years, in fact--since Lurie's last novel, and her new one, like her most successful previous outings, Foreign Affairs and The War Between the Tates, has a delightfully punning title. For the last resort, in this case, is that end-of-the-line city Key West, and it is also the suicide being grimly contemplated in the sunshine by celebrated naturalist Wilkie Walker. Wilkie, convinced that time has passed him by and that anyway he has cancer, has begun to be brusque with his beloved and ultra-loyal wife, Jenny. Determined to drown himself from a handy beach, he finds fate intervening with infuriating regularity. Meanwhile, Jenny, feeling abandoned, is beginning to taste the pleasures of lesbian love with Lee Weiss, a veteran earth-mother islander who runs a women-only guesthouse. Then there's handsome gardener Jacko, who has AIDS, his bumbling, animal-loving cousin Barbie and her ferocious mother, Myra, and ex-Beat California poet Gerry, who also has eyes for Jenny. Lurie puts her well-chosen cast through their paces with expert aplomb and with often hilarious and occasionally touching results. She is as witty as ever, if not quite as malevolent as of yore, and the novel is a perfect summer read: entertainment that is at once highly intelligent and mildly edifying. 35,000 first printing; author tour. (July)
close
Details