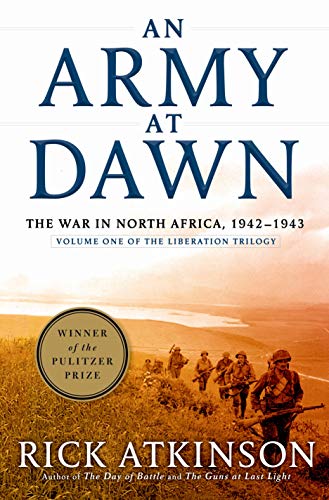 Atkinson won a Pulitzer Prize during his time as a journalist and editor at the and is the author of and of . In contrast to 's illustrations of technomastery, this book depicts the U.S. Army's introduction to modern war. The Tunisian campaign, Atkinson shows, was undertaken by an American army lacking in training and experience alongside a British army whose primary experience had been of defeat. Green units panicked, abandoning wounded and weapons. Clashes between and within the Allies seemed at times to overshadow the battles with the Axis. Atkinson's most telling example is the relationship of II Corps commander George Patton and his subordinate, 1st Armored Division's Orlando Ward. The latter was a decent person and capable enough commander, but he lacked the final spark of ruthlessness that takes a division forward in the face of heavy casualties and high obstacles. With Dwight Eisenhower's approval, Patton fired him. The result was what Josef Goebbels called a "second Stalingrad"; after Tunisia, the tide of war rolled one way: toward Berlin. Atkinson's visceral sympathies lie with Ward; his subtext from earlier books remains unaltered: in war, they send for the hard men. Despite diction that occasionally lapses into the melodramatic, general readers and specialists alike will find worthwhile fare in this intellectually convincing and emotionally compelling narrative.