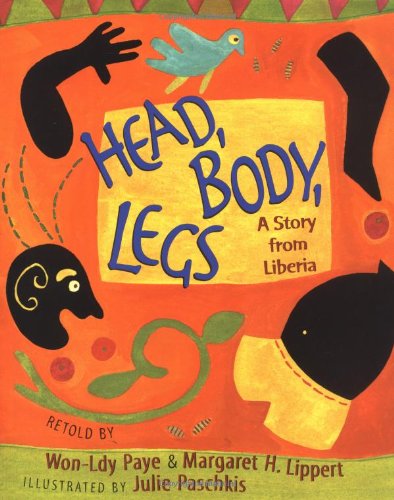 "Long ago, Head was all by himself," begins this African creation story about how the human anatomy came to be. "He had no legs, no arms, no body. He rolled everywhere. All he could eat were things on the ground that he could reach with his tongue." Lippert and Paye previously collaborated on , and the two here relate this traditional tale of cooperation from Paye's Dan tribe. Bordered in a distinctive lilac and orange pattern of oblong blocks and zig-zags, Paschkis's () gouache illustration shows "Head," a bold, ebony, free-floating shape resembling an African mask, against a deep blue background. When he attempts to shake down a cherry tree by rolling headlong into the trunk, Head meets Arms and convinces the appendages to form a partnership: "They... attached themselves to Head above the ears." Later, a lime-green wash provides vivid contrast as Head and Arms meet Body and attach themselves just above the sloping arch of his belly. A series of witty images depicts the group as they team up with Legs and negotiate their proper places. The action plays out against a background so saturated with citrus colors that the spreads resemble African fabrics in their beauty and fluidity. This attractive volume delivers its upbeat message with intelligence and humor. Ages 3-7.