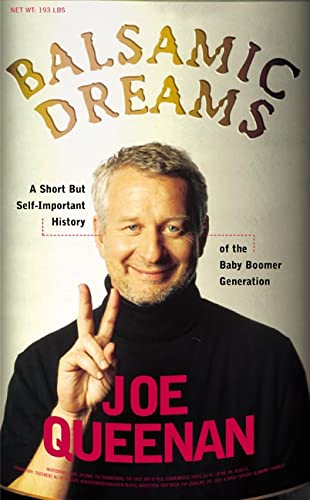 BALSAMIC DREAMS: A Short but Self-Important History of the Baby Boomer Generation

What distinguishes the baby boomers? According to film and social critic Queenan () in this witty, sardonic and heartfelt paen to his fellow aging boomers, they weren't the first generation to sell out "but they were the first generation to sell out and then insist that they hadn't." Deftly distilling the impact of a wide range of events in popular culture, he cites April 21, 1971, as one of "ten days that rocked the world" for boomers, with the release of Carol King's album . Meanwhile, recent films such as and appeal to boomers, he observes, with the message, "Just because you're dead doesn't mean you can't get your life organized." And, he asks, won't someone "admit that is Holocaust-denying crap?" Queenan occasionally belabors his humorous conceits (e.g., he ranks baby boomers as the 267th best generation, "right behind the Carthaginians in 220 B.C."). Yet he can also cut to the quick: "We abandoned the poor, the downtrodden and the oppressed [for] postdoctoral work in American Studies....We made millionaires out of nitwits like Deepak Chopra and Tom Clancy while geniuses starved."