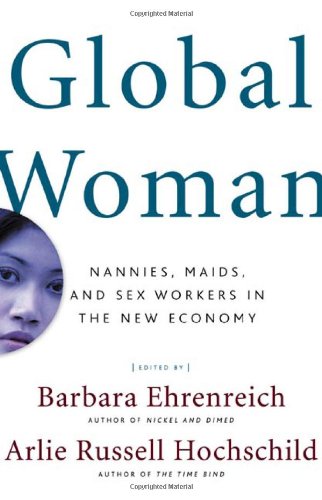 The current discourse on globalization, according to the authors, has little to say about the "migration of maids, nannies, nurses, sex workers, and contract brides," since, to most economists, these women "are just individuals making a go of it." The positive effects of their labor are sometimes noted: the money they remit to home countries is a major source of foreign exchange, and the work they do in the host country enables a large pool of upwardly mobile First World women to pursue productive careers. The negative consequences, which can include emotional hardships caused by leaving children behind as well as physical strains, are rarely acknowledged. Social critics Ehrenreich () and Hochschild () point out that in previous centuries the developed world imported natural resources, and now the import du jour is women, ideally, "happy peasant" women who can care for the elderly and disabled, lovingly raise children and provide sexual services for men. The editors have gathered some 15 essays on aspects of "the female underside of globalization"—e.g., Filipina housekeepers in Hong Kong, Latina domestic workers in Los Angeles, sexual slaves in Thailand, Vietnamese contract brides—mostly written by academics working in the field, but largely jargon-free. While one small book can't say everything about a major global phenomenon, Ehrenreich and Hochschild have at least brought attention to these women's plight. Maps not seen by .