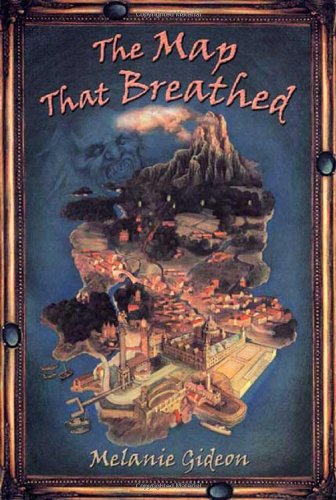 THE MAP THAT BREATHED

Gideon's first children's novel starts off with a tantalizing hook: young Nora receives an anonymous package containing a live bird, which turns into a book before her eyes. Over the next few days, she begins to develop a sinister bond with the book, despite its blank pages: separation produces pain. But the author abandons this story line for an overly ambitious, disjointed fantasy epic concerning another realm, an archipelago called Sanasarea. Nora meets Billy, who has the ability to open windows between the ordinary world and Sanasarea; she crosses through such a portal, at the same time allowing the Provisioner, a demonic figure who devours the souls of children, to enter her own small town in Rhode Island. The gruesome villain takes his captives in particularly disturbing scenes. Nora's background as an adoptee occasions a bit of mystery, and drama escalates to some degree as the Provisioner, freshly escaped from the titular map that held him for years, wreaks havoc. However, Sanasarea's social and mystic structures are unnecessarily complex, and an oddly pessimistic undertone of predestination makes the whole place seem arbitrary. The undoing of the Provisioner, while nicely handled, tips the hat to Madeleine L'Engle's . As a whole, the book feels unfinished, with too many strands of story lying loose across the two landscapes. Ages 11-up.